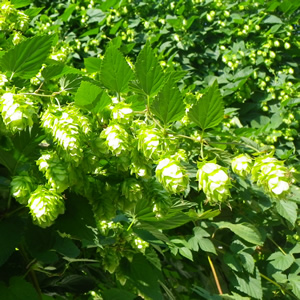 Bertwells can be obtained fresh early in September, or dried and baled year round. The hops are carefully dried by about 50%, then baled and frozen to retain their brewing qualities for up to 2 years.

Grinding and custom package sizing are available on request.

Bertwell hops may be the first truly Ontario hop. Plants found by Ian Hanna near Picton in 2004 were propagated and tested for two years to determine their ability to produce brewing quality hops.

They are a prolific and hardy variety with consistent brewing qualities comparable to any classic ale hop.

Bertwell hops are named for Bert Grant, the iconic craft brewer (and inveterate hop lover), and Wellington County, the site of their first commercial hopyard.

Lab testing and test brews strengthened a belief that these plants are probably British survivors from Prince Edward County’s ‘Barley Days’, when Upper Canada was a barley and hop growing stronghold of the British Empire.

Bertwell hops are grown by select individuals to organic methods, hands on cultivation, and hand picking, to ensure the hops are in their optimum condition, free from damage and contamination, upon delivery.